Emilie Rhys was born in New York City in 1956, the daughter of NYC/NOLA artist Noel Rockmore and Elizabeth Hunter, and the granddaughter of NYC artists Floyd Davis and Gladys Rockmore Davis. She grew up in Portland, Oregon and San Francisco, CA. Ms. Rhys drew pictures from the time she could hold a crayon, and by the age of 14 she had developed a strongly individualistic style evidenced in her first small sustained series of works utilizing rapidograph pens and a pointillist technique to produce drawings of imaginary mystical characters.

Over the course of her 45-year art career—first in San Francisco, then in New Orleans, Paris (France), New York City, Santa Fe, and finally back in New Orleans in 2011—she has produced artworks on paper and canvas that appear in collections around the United States and Europe.

Though she did not grow up with her father Noel Rockmore, they shared some artistic proclivities, such as preferring to work with live models and, speaking of paintings on canvas or masonite, to work from dark to light. This means to apply a dark color ground to the blank white surface of the new canvas or gessoed board before painting an image on it. 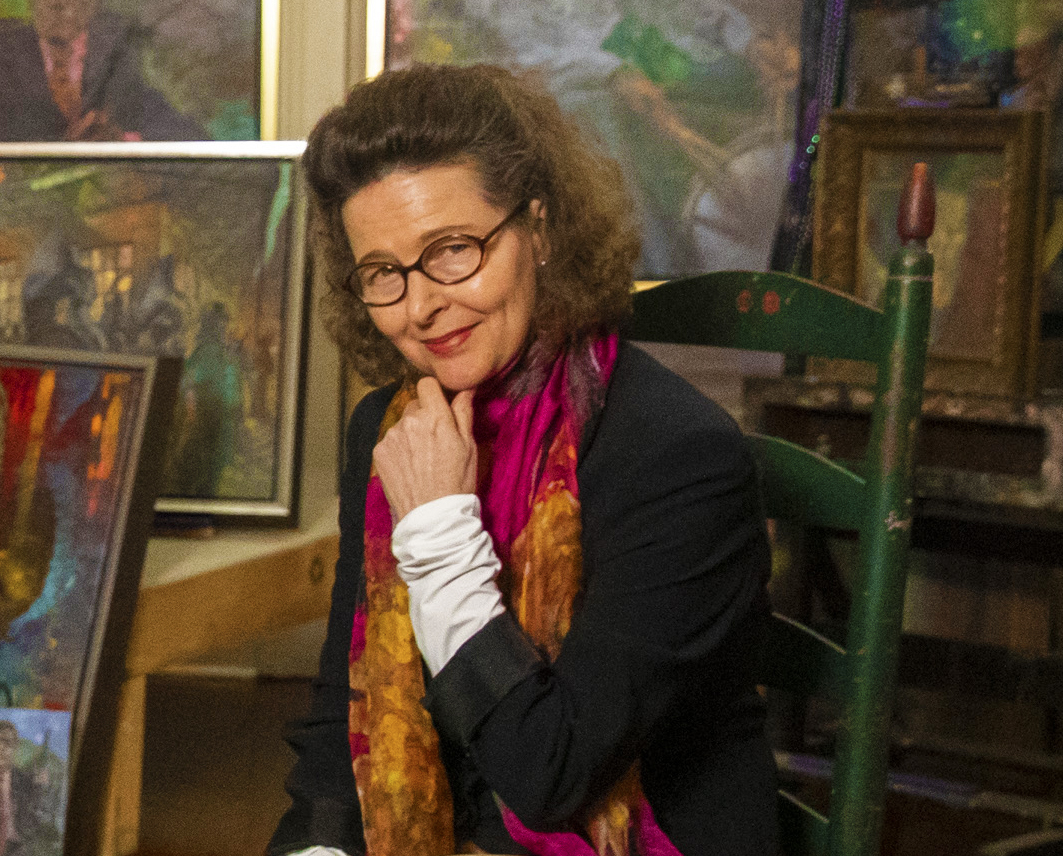 EMILIE RHYS IN HER FRENCH QUARTER ART STUDIO
December 19, 2019 photo by Sophia Germer, during a long photo shoot just prior to delivery of seventeen Rhys oil paintings to the New Orleans Jazz Museum for their 2020-2021 exhibit, “New Orleans Music Observed: The Art of Noel Rockmore and Emilie Rhys.” 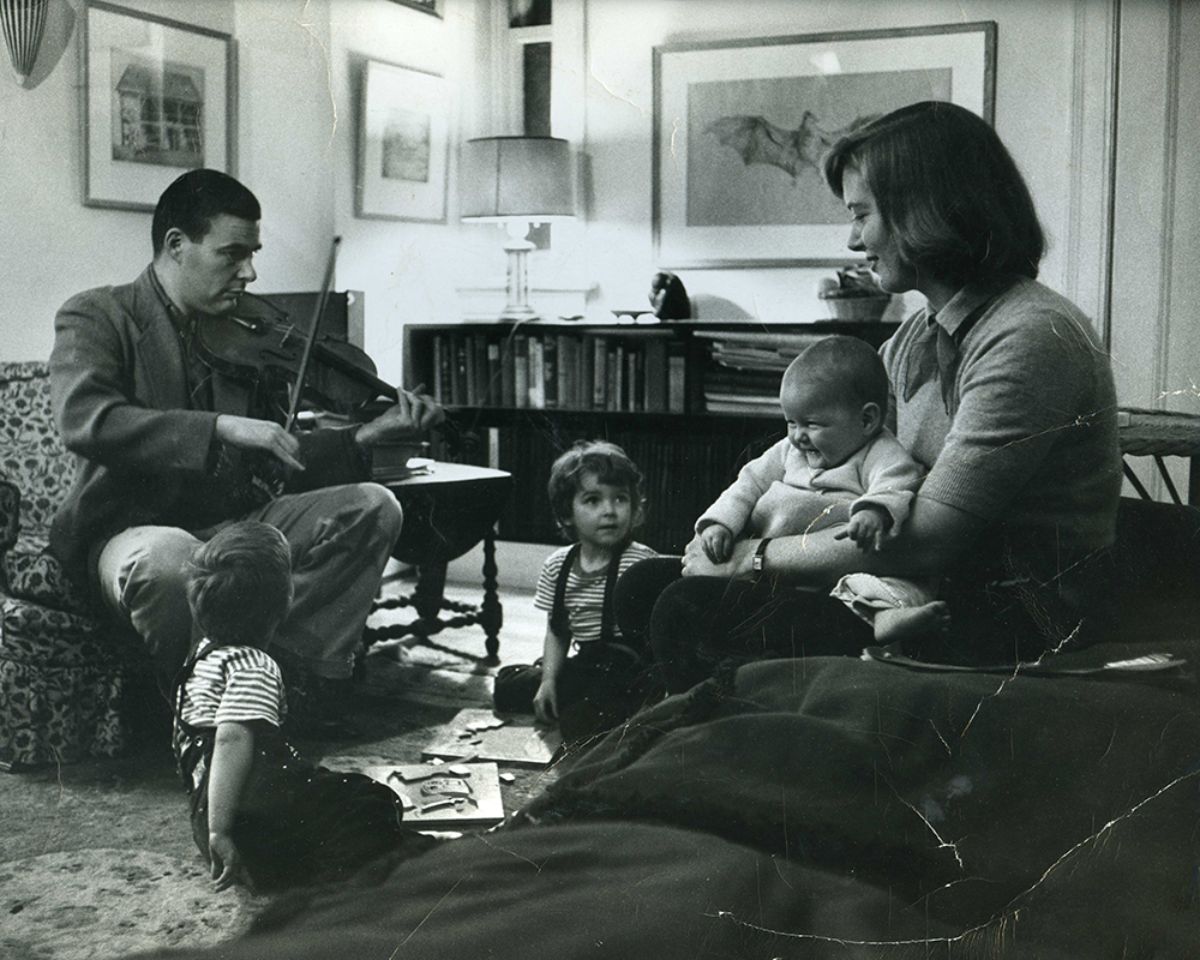 THE DAVISES: LIFE MAGAZINE PHOTO BY ELIOT ELISOFON
Where it all began: the family at home at the Hotel des Artistes, 1 West 67th Street, NYC, November 27th,1956. Noel Davis (later Noel Rockmore) at left playing the violin and his wife Betty Davis at right; their son Chris at left on the floor; their daughter Robin at right on the floor; and their daughter Emilie Rhys on her mother’s lap. Although this particular photo did not appear in the magazine, it was one of over 100 taken that day by Mr. Elisofon for a story profiling the young artist Noel Davis that ultimately appeared in print in the August 12, 1957 issue. 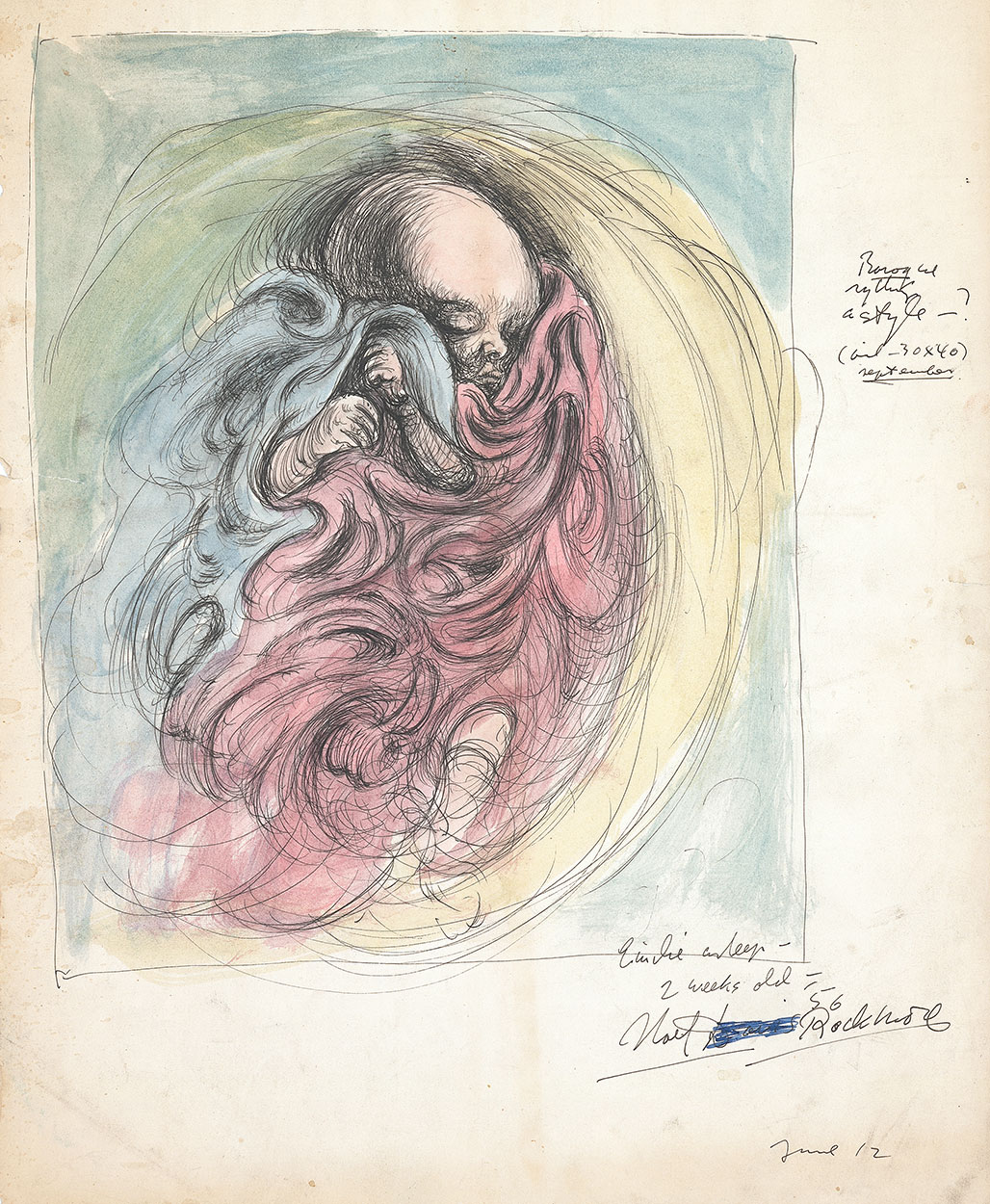 In her youth, there was no artistic influence from Ms. Rhys’s father or grandparents because she was separated from them by the divorce of her parents when she was under 2 years old; her mother kept none of his artworks nor photos of him, and there was zero contact. Years passed by and instead of art school and without any support at home, Ms. Rhys taught herself by studying the artists whom she admired: Giotto, Rembrandt, El Greco, Cezanne, and Picasso among others. Slowly over the years, through trial and error she built a solid base of technical skills.

She rejoined her father when she was 20 years old and lived with him in the French Quarter for 10 tumultuous months. He put her to work on his mural commissions. She painted a small mural of her own on a third-story courtyard balcony wall in the historic Skyscraper building at St. Peter & Royal. 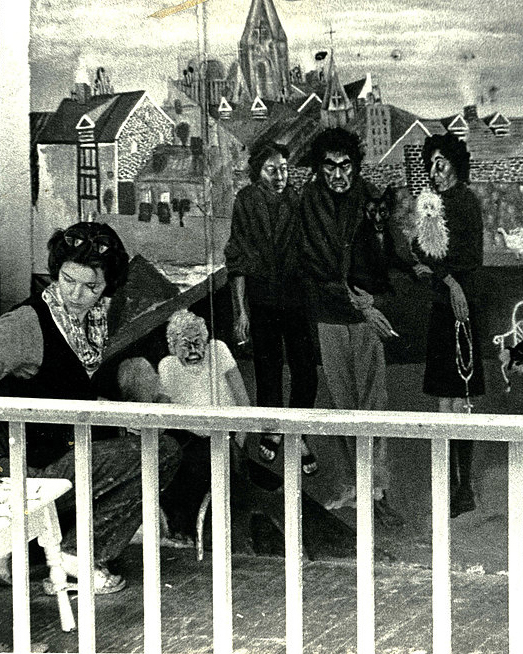 Ms. Rhys then became a successful Fence Artist in Jackson Square doing pastel portraits and would have stayed in New Orleans had her father been more supportive of her nascent work. But his volcanic fury pushed her away.​ Ms. Rhys moved on, and lived in many places after that, including a year and a half stint in Europe (mostly Paris), back to New York, and in 1988 her future husband John Heller took her to Santa Fe, New Mexico. There she was enchanted, as so many artists are, by the light and by the intensity of colors in the terrain and sky which caused a significant shift in her artwork towards brightness and an earth/sky color scheme. After several more visits, the couple moved from New York City to Santa Fe in 1994.

It wasn’t long before guitarists Carlos Lomas and Bruce Dunlap caught Ms. Rhys’s eye at El Farol on Canyon Road and her first live drawings of musicians commenced. This activity progressed from there to include other venues and a few other musicians, most notably Bill and Bonnie Hearne and their band at La Fiesta Lounge in La Fonda on the Plaza, and a Russian singer, Olga, accompanying herself on accordion at Café Oasis.

Rhys and Heller took up residence in a home with a studio for her, and there—starting in 1999—she produced a large series of portraits, oil on wood prepared in her unique fashion. When that series ended in 2001, her time became increasingly distracted away from art and by the end of the decade she was floundering in her efforts to rekindle her art creation. This led to a crisis which resulted in her return to New Orleans in 2011, where, in Preservation Hall, she started to get things on a better track leading ultimately to success in New Orleans. ​ 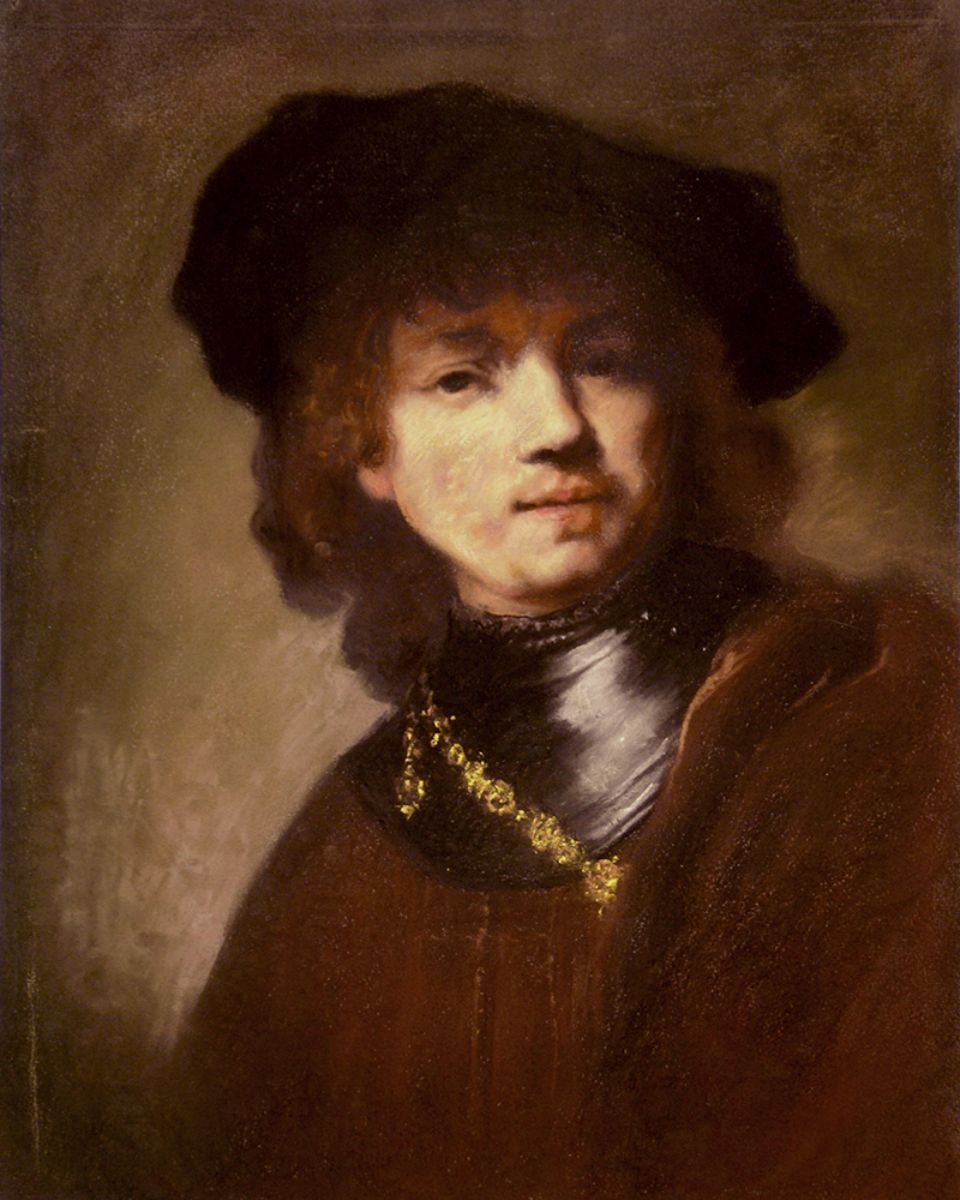 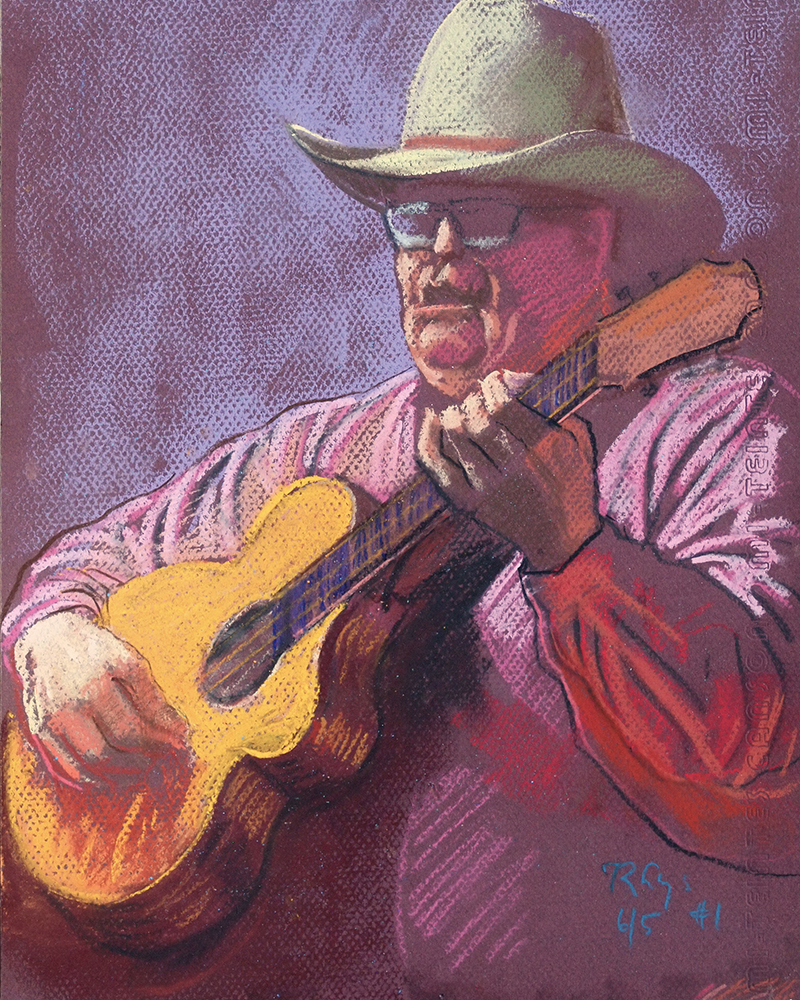 Pastel of Bill Hearne, in performance at La Fiesta Lounge in La Fonda on the Plaza, Santa fe 1997. Pastel of Olga on accordion at Café Oasis, Santa Fe 1998

The mural was commissioned by Al St. Germaine for his club Maison Bourbon (Bourbon & St. Peter) and he wanted musicians Frank Moliere, Thomas Jefferson, Roy Liberto, Johnny Horne, Murphy Campo and Tommy Yetta, to name a few, depicted. St. Germaine himself appears at center wearing a sash, his daughter just to the left of him, and his wife below her. Purchasers of the book “New Orleans Music Observed” can see this up close on the 26.5″ fold-out print, and a full key to characters. 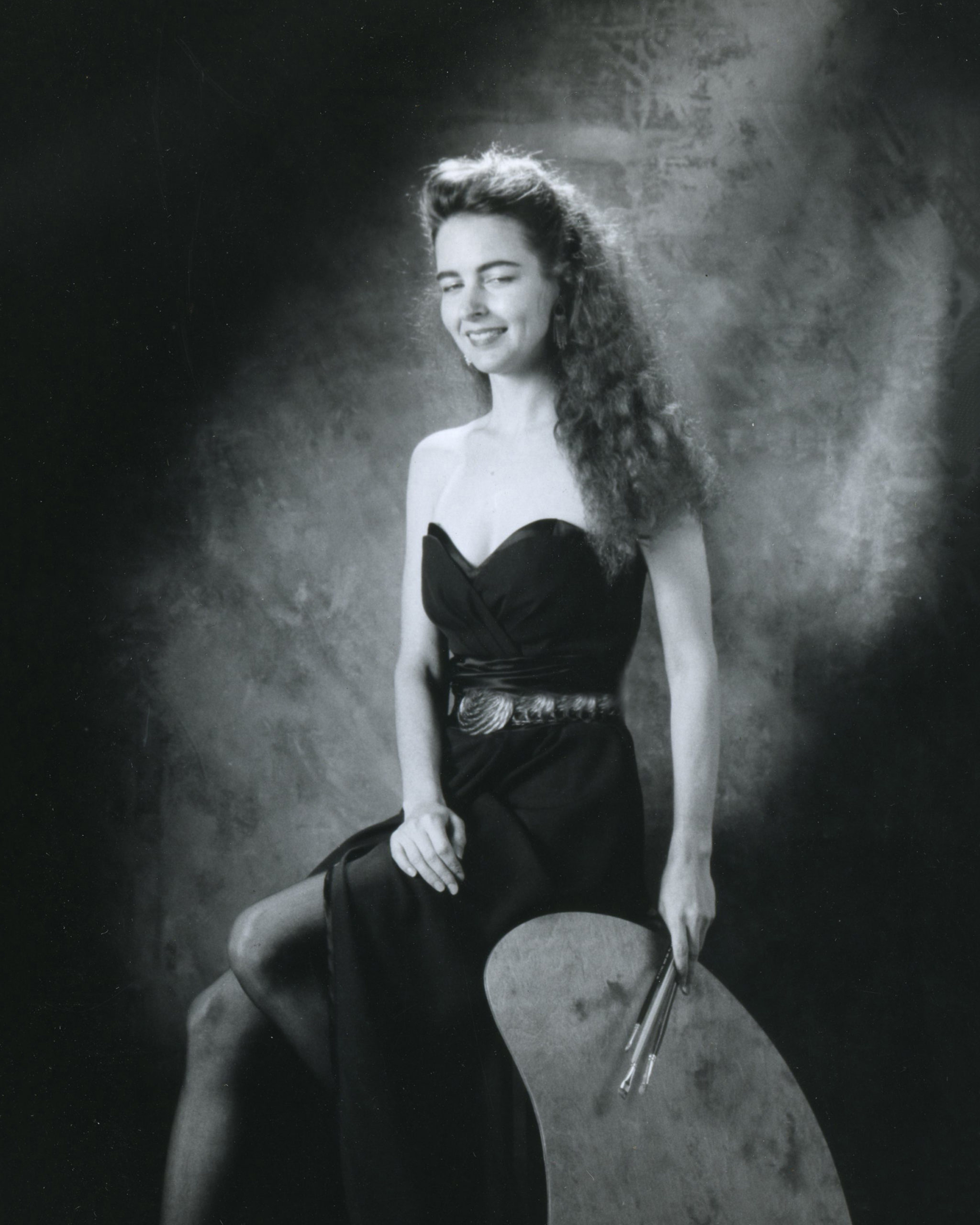 EMILIE RHYS AT AGE 32
A photography studio shot of the artist in New York City in 1988, where the artist lived and worked from 1982-1994.  Unidentified photographer. 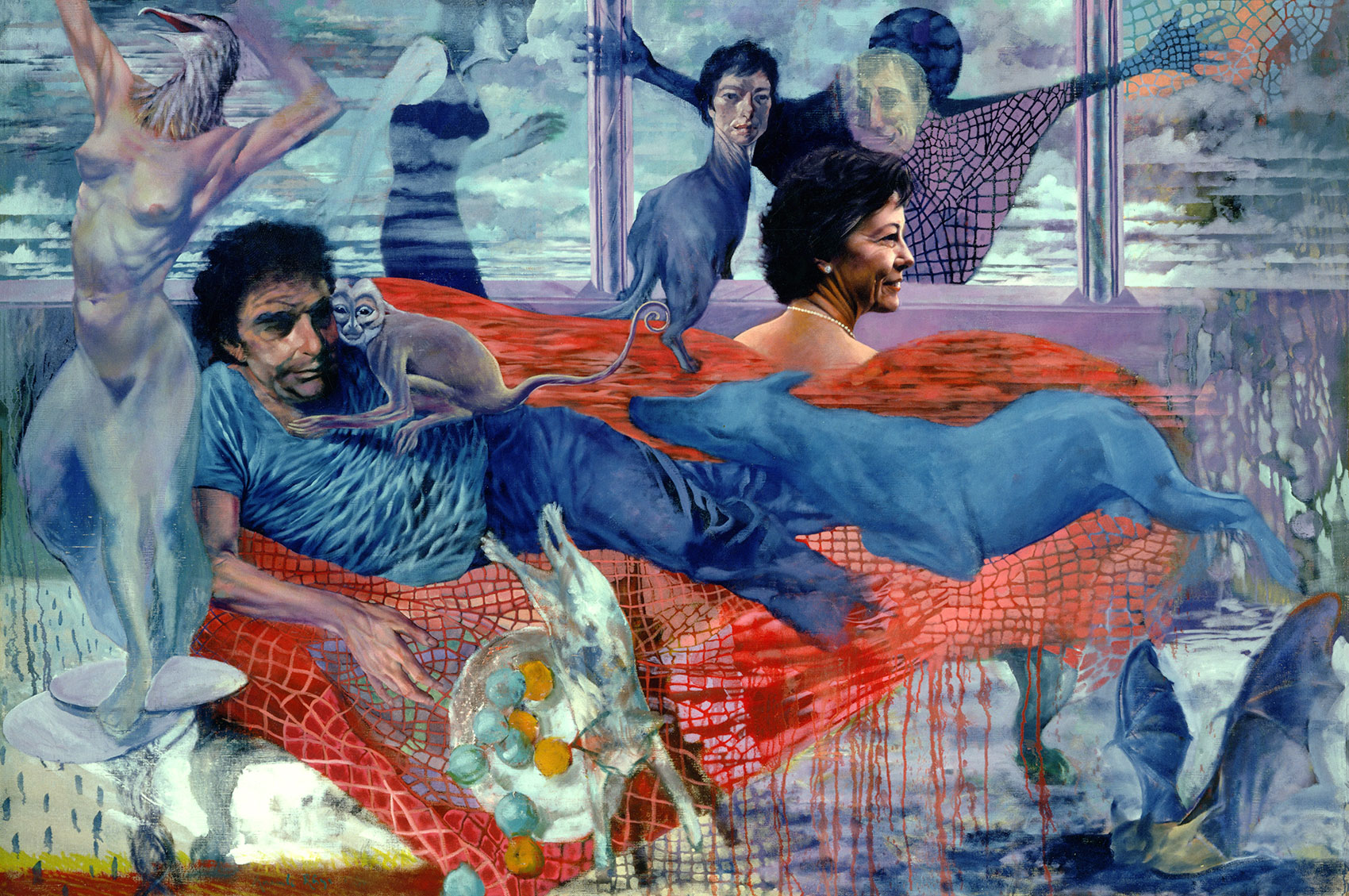 “IS NOEL DEAD?”  A 1989 oil painting, 40″ x 72″, by Emilie Rhys. Photo by Patty Wallace.
The figure at left is an imaginary self-portrait. On the sofa the artist’s father Noel Rockmore reclines with a monkey clutching him (a reference to the many colored-pencil drawings Rockmore did in the early 1950s of stuffed monkeys at the New York Natural History Museum) and his dog Remby seeking attention at his feet. A girlfriend (Marymay) of Rockmore is standing behind him. Rockmore’s sister Debbie is depicted as an animal with human head. Debbie’s life partner Bonnie Vail is the character with outstretched arms. The artist’s mother Betty is depicted in profile. The bat at lower right is a reference to drawings and paintings Rockmore produced early in his career featuring bats. 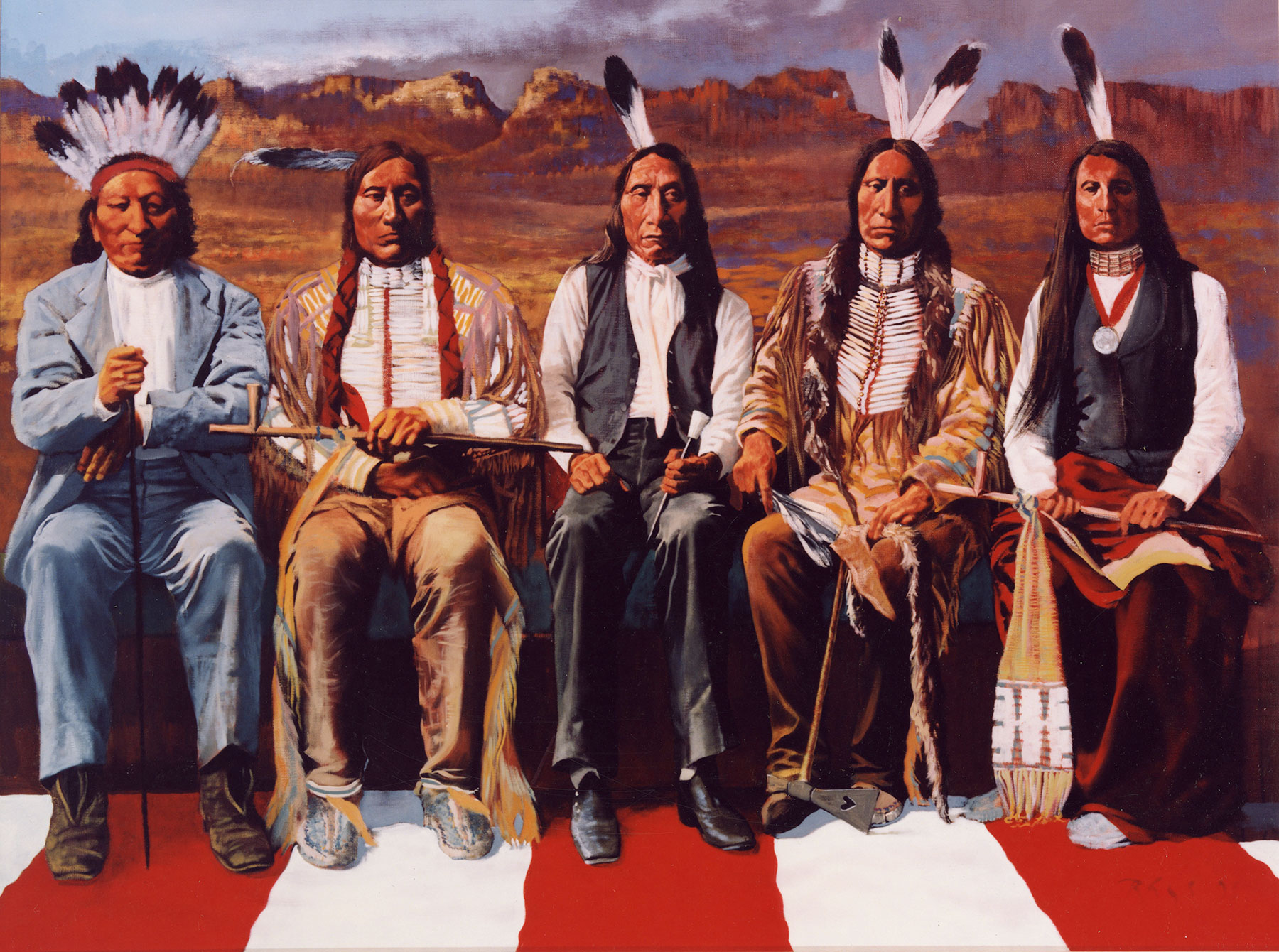 “EXILED IN THE LAND OF THE FREE, #1″  A 1993 oil painting, 24″ x 36”, by Emilie Rhys. Photo by Patty Wallace.
Lakota Sioux leader Red Cloud is depicted sitting on a massive American flag with a group of fellow leaders, part of a large series on the subject of Manifest Destiny and its effect on the Original Peoples of North America.

The final painting in Rhys’s “Manifest Destiny” series begun in 1993. Sitting Bull was the revered Hunkpapa Lakota holy man and political leader of his people against United States government, military and settlers. The dancers depicted in this painting were Rhys’s friend Gioia Tama’s flamenco dance students.

The story of Emilie Rhys’ artistic body of work in New Orleans begins on October 24th, 2011 when she arrived back in town after a decades-long haitus and went straight over to Preservation Hall and did something she’d never done before: she started drawing the musicians performing there that night. She had not sat in the Hall since February 1995, for her father Noel Rockmore’s memorial service, a week after he passed away. 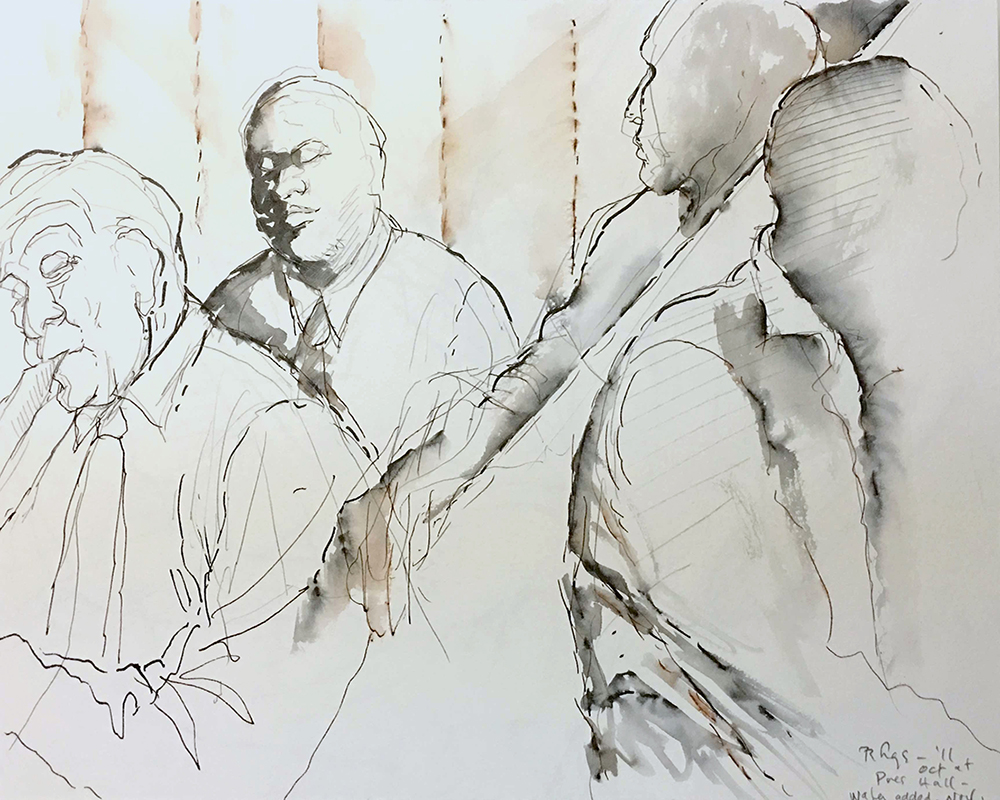 RHYS NOLA SKETCHBOOK#1, page 19, October 2011
Preservation Hall Jazz Band. This is one of the first drawings in the NOLA series now ten years in development. 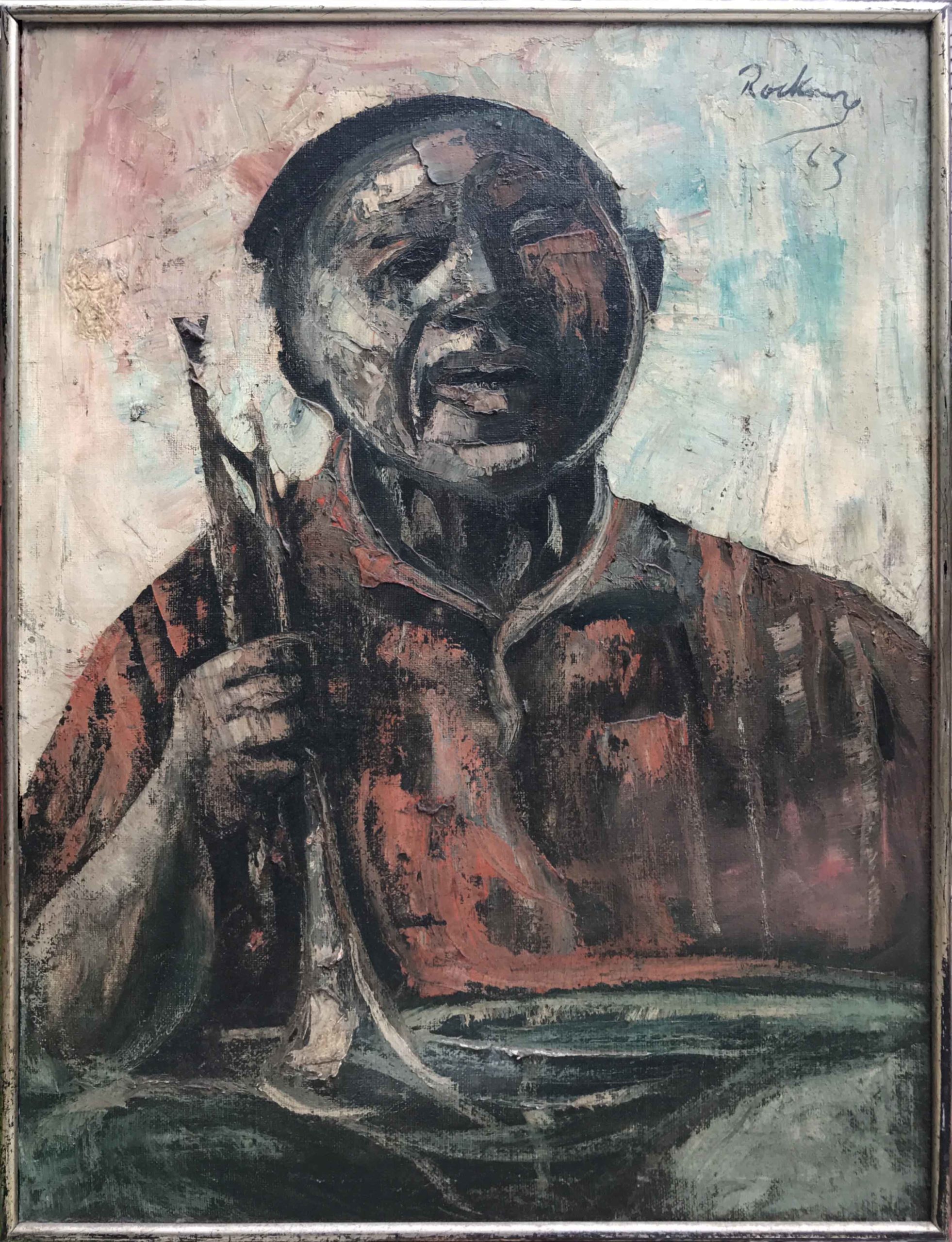 Rockmore oil on canvas of trumpeter Andy Anderson, 1963. This painting is on display at Preservation Hall, behind the bass player. 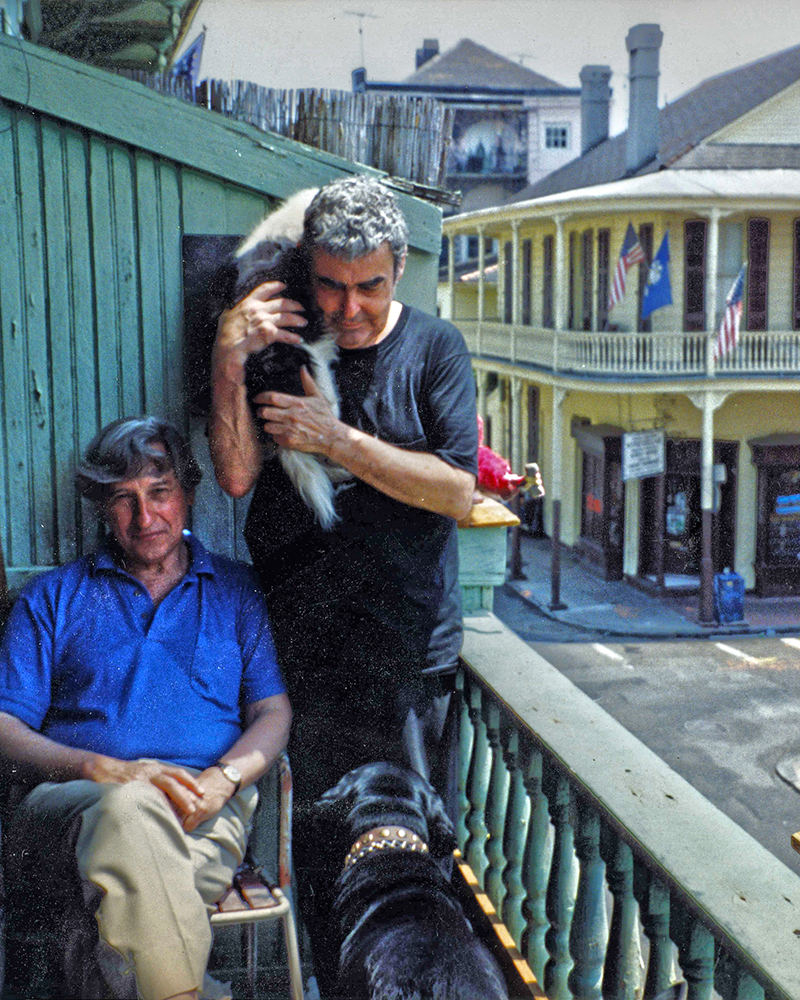 They are on the Rockmore studio second floor balcony overlooking the corner of St. Peter Street and Dauphine Street. The two were old school friends.

In the 1960’s, Rockmore painted Jazz musicians at Preservation Hall. His French Quarter art dealer Larry Borenstein encouraged him to paint during nightly performances and during the day paid him to create a series of life-sized oil portraits of people like Billie and DeDe Pierce, Kid Thomas Valentine, Louis Nelson, Chicken Henry and many others who were performing regularly at the new venue, Preservation Hall, which had been “Mr. Larry’s Art Gallery” before he and others converted it into the hallowed hall we today know and love.​

Some of those canvases grace the walls of the performance space to this day, and this is what makes it particularly special for Ms. Rhys to draw there with the spirits of her father and the old musicians looking down on her as new generations of musicians perform the music, and she creates new artworks of them in action.​

A friend, Rita Posselt, took Ms. Rhys to Palm Court and to Frenchmen Street in November 2011, soon after that first week back in New Orleans, and things started happening which gave Ms. Rhys the idea that there was possibly a future for her here. People took notice of what she was drawing and though it took months for her drawing confidence to return fully, by January 6, 2012, Ms. Rhys had finally created a break-out piece, a drawing of the Washboard Chaz Blues Trio at the Spotted Cat.

The drawing style evolved over time, as did Ms. Rhys’s experimentation with different fountain pens and water media, and by the summer of 2014 the style had settled into the mature signature characteristics still consistently evident to this day, and as of January 2022, the New Orleans Sketchbooks are legion, numbering 107 and counting.